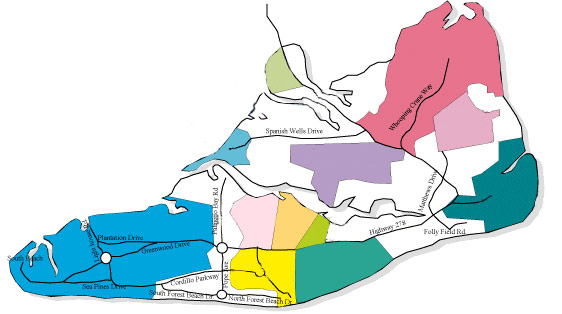 Sea Pines was the original planned development on the island, and became the model for those which followed. The "Grandfather" of Island-Plantations was founded in 1956 by Charles Fraser. For a number of years Sea Pines and Hilton Head were synonymous. For most the candy striped lighthouse in Harbour Town has come to symbolize the Island and its sensitive mix of residential and visitor oriented developments and recreational facilities blended harmoniously into their natural surroundings. Sea Pines is home to the Heritage, a popular tournament on the PGA tour. With over 5,000 acres it is the largest of the Island's plantations. Almost 1300 of these acres are devoted to parks, forest preserves, lagoons and marshlands!

Fully half of this plantation is devoted to multifamily developments, and therefore, most of the people you run into are probably visitors in the pursuit of a good time. This is one of the more "active" plantations for that reason. Of the three 9 hole golf courses, Clipper and Galleon have hosted the PGA Tour three times! The Shipyard Racquet Club has been called "possibly the most beautiful tennis complex anywhere in the United States" and is rated in the top 50 tennis resorts in the country by Tennis Magazine. There is a "quieter" side of single family homes in Shipyard, but for the most part it is fast-paced and fun.

Palmetto Dunes is a 2000 acre resort/residential community and is one of the most visited on the Island. When you consider the three miles of beach, the three championship courses designed by Fazio, Trent Jones, and Arthur Hill, the twenty-five court Palmetto Dunes Tennis Center, and Shelter Cove Harbour - the largest deep water harbour on the Island - surrounded by Fine restaurants, shops, and villas, it is no wonder Palmetto Dunes is so popular! One of the unique features of this plantation is the twelve mile lagoon system, fed by the waters of Broad Creek, which meanders by the homes and villas and is great for canoeing and fishing. The Leamington area of Palmetto Dunes, behind its own security gate, is the most exclusive section of the resort. The homesites have the challenging Arthur Hills Course and Clubhouse as their centerpiece! In addition, located across from the Arthur Hills Clubhouse is a recreational center with pool, baby pool, pavilion, and boat dock on the lagoon system as well as a Beach Pavilion providing Leamington residents direct access to the Atlantic Ocean! The Beach Pavilion has a large sun deck, restrooms, storage, and showers.

Located on the north end of the Island where Port Royal Sound meets the Atlantic Ocean, this completely private plantation is the point first sighted by Captain William Hilton when he first "discovered" the Island. The water views here are the most grand on Hilton Head. Just outside the plantation is the world class Port Royal Resort with three 18 hole golf courses, two championship croquet courts, and the 16 court Port Royal Racquet Club which has three court surfaces - hard, grass and clay. The resort also has the Westin Hotel, which is South Carolina's only four diamond resort hotel!

Occupying almost 4,000 acres on the northern corner of the Island with frontage on Port Royal Sound and the Intracoastal Waterway, this community offers to its residents all the amenities of a resort. Within the confines of Hilton Head Plantation you'll find Bear Creek Golf Club, Oyster Reef Golf Club, Dolphin Head Golf Club, and The Country Club of Hilton Head. There are twelve tennis courts, jogging trails, nature conservancies, a community recreation center, two miles of beautiful beach on Port Royal Sound, and the most glorious sunset on earth at Skull Creek Marina located directly on the Intracoastal Waterway. In addition, there is excellent dining and shopping facilities.

This is a completely private residential community. Its golf course, designed by Pete Dye, has been named one of the top twenty in America by Golf Digest and is open only to owners and their guests. Residents also enjoy boating, swimming, tennis, and fishing in their exclusive and quiet environment-Long Cove border's on the wide marshes of Broad Creek and has its own small marina.

Possibly the most exclusive community on Hilton Head, Wexford is known for its stately homes and the man-made harbour and canal system which allows many property owners to moor their boats at: their back doors! Boaters can enter Broad Creek through a lock system which protects the harbour from tidal fluctuations. Community life is centered around the Wexford Club which provides the residents with a private golf course, tennis and croquet clubs, and of course the harbour!

When the Spaniards explored this part of the coast they landed on this area of the Island to get fresh water - hence the name Spanish Wells. Because of its remote location "off the beaten path" of Highway 278 Spanish Wells has evolved into the most serene and quiet of all the plantations. Located on a point of land between Calibogue Sound and Broad Creek, it has its own nine hole golf course and club. It is completely private.

This is the most recently completed residential community on the Island. The Arthur Hills golf course has been praised for its quality of design and natural beauty. The master plan for Palmetto Hall indicates 500 homesites on the 750 acres with over 200 acres devoted to natural wetlands, preserves, and lagoons. There is a grand "Old South" style clubhouse for residents, and a large pool, tennis courts and children's play area.

Yacht Cove is a small residential community tucked between Long Cove and Shelter Cove with frontage on Broad Creek. Several individual residential areas and a dock on the water are included, it is centrally located to shopping, dining, golf and businesses.

Located on Jenkins Island, which is just across a short causeway from the northernmost end of Hilton Head Island, Windmill Harbour is the place for anyone who appreciates the boating life. This private plantation is centered around the harbour, or more specifically, the South Carolina Yacht Club, which sits on a small peninsula in the middle of the harbour. The marina consists of 260 slips, 27 of which are attached to homesites and allow owners to moor at their back doors! There is a lock system which maintains harbour depth and protects boats from wakes, currents, and silting. Boaters can come and go at any tide directly into the Intracoastal Waterway. There is a marina store with food, supplies, and a fueling station. While boaters are out the rest of the family can enjoy harbour front recreation with pool, hot tubs, sauna, and the racquet club!